The votes are in, and the Canadian Football League Players Association has announced the names of the players who will represent their respective teams for the 2022 season. 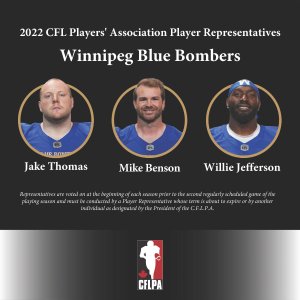 As per C.F.L.P.A. policy, “representatives are voted on at the beginning of each season prior to the second regularly scheduled game of the playing season and must be conducted by a Player Representative whose term is about to expire or by another individual as designated by the President of the C.F.L.P.A”.

Jefferson, the 2019 CFL Outstanding Defensive Player, is entering his third season in Winnipeg and his eighth in the league overall after previous stints with Edmonton and Saskatchewan.

Thomas is the longest serving member on the team after being selected by the Blue Bombers in the fourth round (29th overall) of the 2012 CFL draft. The 31 year old from Douglas, New Brunswick is now into his 10th season with the team and has played 152 games for the Blue and Gold.

Benson is from Winnipeg and returned to his hometown for the 2021 Grey Cup Championship season after spending five of his first seven years in the CFL with the B.C. Lions. The St. Paul’s High School and Acadia University Grad began his pro career in Edmonton in 2012 and also played for Ottawa in 20-19.

The CFL and the Players Association ratified a seven year Collective Bargaining Agreement last month just prior to the start of the season.

Below are the player reps from the other eight teams who have been selected in a vote by their peers.