Tickets go on sale Friday December 7th at 10am.

Take advantage of the Peggy pre-sale on Thursday, December 6th from 10am until 10pm. Use code: NEVER

Canadian musical icon, Corey Hart has announced the details of his first major arena tour across Canada since 1986. Produced by Live Nation, The Never Surrender Tour kicks off in St. Johns, NL on May 31 (Corey’s Birthday) and will follow the May 3, 2019 release of Hart’s new record Dreaming Time Again. Special guests to be announced soon.

Tickets for The Never Surrender Tour will go on sale to the general public on Friday, December 7 at 10am at www.livenation.com. Fans can visit Corey Hart’s Facebook page for exclusive presale details www.facebook.com/coreyhartofficial.  American Express® Card Members can purchase tickets before the general public beginning on Tuesday, December 4 at 12pm local time through Thursday, December 6 at 10pm.

Each ticket purchased for the Never Surrender tour comes with a digital copy of Corey’s new EP when it’s released May 3, 2019.

Dreaming Time Again, Hart’s first studio collection of songs in over 20 years was produced by the legendary Bob Ezrin and will feature the title track and first official single which will be available January 14, 2019.

As prelude to the official single’s release, Corey Hart has launched the seasonal track “Another December” which will be included on the EP. The video for “Another December” is available now: https://youtu.be/1azeQ-9rTmI. The 5 song EP also includes the up tempo rocker “First Rodeo” featuring Jim Cuddy on vocals.  Fans can stream/download “Another December” HERE.

Having sold over 16 million records worldwide by amassing 9 consecutive US Billboard Top 40 Hits and scoring an impressive 31 top 40 singles in his native Canada (Including 12 – Top 10 Hits), Hart is a Grammy nominated ASCAP, multiple Juno and Quebec ADISQ award winner, and was inducted into Canada’s prestigious Walk Of Fame in 2016.

His brooding good looks and James Dean persona became larger than life during the 80´s – where he was regularly mobbed by frenzied fan adulation.

Hart’s iconic debut single, “Sunglasses At Night” was an international sensation propelling the young musician to the summit of the pop world.

The video became a staple on MTV during the summer of 1984 and claimed the first ever Juno awarded in the Video Of The Year category that same year. His sophomore album “Boy In The Box” achieved Diamond status certification (1 million plus sales) faster than any other Canadian artist in history by spawning four hit singles lead by his classic anthem “Never Surrender” which spent nine weeks at number one in Canada, winning “Single of the Year” at the Juno Awards in 1985.

Corey has performed in arenas from Montreal to Manila – from Tokyo to Toronto where he sold out the 25,000 capacity CNE Grandstand in 1985. 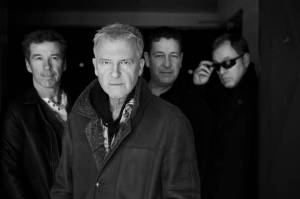 Corey Hart has just announced the addition of very special guests, Glass Tiger to join the line-up of The Never Surrender Tour. Best known for their top-ten hits “Don’t Forget Me” and “Someday”, the Canadian rock band will join Corey Hart on all the Canadian dates of the upcoming 2019 tour. Tickets for The Never Surrender Tour will go on sale to the general public on tomorrow, December 7 at 10am at www.livenation.com.

Last week, Canadian icon, Corey Hart announced the details of his first major arena tour across Canada since 1986. The Never Surrender Tour kicks off in St. Johns, NL on May 31 (Corey’s Birthday) and will follow the May 3, 2019 release of Hart’s new record Dreaming Time Again. Each ticket purchased for The Never Surrender Tour comes with a digital copy of Corey’s new EP when it’s released May 3, 2019.

After forming in Newmarket, Ontario, Glass Tiger kicked off their career in the summer of 1984 when they spent two evenings opening for Boy George and Culture Club at Toronto’s Maple Leaf Gardens. Then called, Tokyo, their dynamic, original sound captured the moment of the mid-80’s and led them to signing a record deal with Capitol Records. Tokyo officially became Glass Tiger.

Glass Tiger’s first album The Thin Red Line set a record for being the fastest selling debut recording in Canadian history, going gold within weeks of its release. Following this, the bands next two albums Diamond Sun and Simple Mission, solidified their reputation as being one of Canada’s better song crafters. Having toured with international music legends like Tina Turner in Europe, the ever-popular Journey (with Steve Perry) in America and Roxette throughout Europe and Canada, Glass Tiger is still going strong, 31 years later.

With their latest album 31, Glass Tiger is now into the third decade of a phenomenal music career. Recorded in Nashville by fellow Canadian entertainer Johnny Reid, Glass Tiger was guided back to the songs that originally made them stars in Canada and beyond. Just as remarkable, the core band members have maintained a brotherhood built on respect and friendship throughout that journey. Today the band includes original members Alan Frew on vocals and guitar, Sam Reid on keyboards, Al Connelly on guitar, and Wayne Parker on bass, as well as longtime drummer Chris McNeill who joined in 2000.